Home > Who We Are > Our Communities > Yes, Tilda, Engineering Students Rock Musicals!

If you have been laboring under the false assumption that engineering students are a serious lot, given to scaling plans rather than musical heights, we’re here to set you straight. 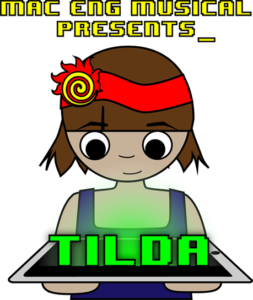 Each year, a group of ambitious engineering students at McMaster University in Hamilton turn their considerable talents to the stage. Granted, they are better than most at calculating and building a foundation of props, but they also write the script, hilariously re-interpret the lyrics to popular songs and deliver a song and dance extravaganza that parodies, in what has become something of a tradition, the McMaster Engineering Life.

Assured that no Dean or Profs would be hurt in the making of this production!… Crozier & Associates bravely added our sponsorship to this year’s McMaster Musical – TILDA (loosely based on the plot of Roald Dahl’s beloved book Matilda, with a devious twist or two) which played to sold-out houses from March 19-21st.

Congratulations to all the cast and crew of TILDA for a seriously (?) great performance!

Print | Back to Our Community
Rockin’ and Rappin’ the House IT WAS A POLARIZING DAY!