Silfab Ontario Completes the Supply of Over 23,000 Modules to the Alderville First Nations Solar Farm Project

Alderville First Nation, located north of Cobourg, has completed their 5.7MW Solar Park.  Power produced by the Rice Lake region installation will be used to feed into the grid supplying energy to neighboring farms and homes. All in all, the system is expected to provide almost 7 Millions of kilowatt hours of power annually or enough clean energy for 729 homes. It will also offset approximately 4,732 tonnes of carbon dioxide annually. 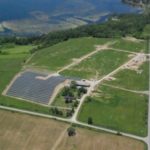 The well attended ribbon cutting ceremony occurred on October 25th under a clear sky.  Following the opening remarks by Chief Marsden and Grand Chief Madahbee, His Honourable MPP, David Zimmer, Ontario Minister of Aboriginal Affairs, addressed the community and brought the congratulations of the Ontario Government, reminding the audience how this solar park was the first in the Province entirely owned by a First Nation and how he was expecting more would follow in its footsteps. The project was commissioned under the Ontario’s Feed-in Tariff program and the inauguration followed by a few days the announcement that the Green Energy Act goal of phasing out coal power in Southern Ontario would be reached by the end of 2013, one year ahead of schedule.

Mr. Paolo Maccario, COO and General Manager of Silfab and CEO of Espe Sunparc America was in attendance and recognized as one of the valuable partners for the early participation in the project, and ultimately the supply of all the solar PV modules, foundations and racking.

The original intent to optimize module generation utilizing mono crystalline cells, as well as training and employing the Alderville community members in the full installation of structures and modules, was fully accomplished and the project completed one day ahead of schedule, in spite of what Chief Marsden described as significant challenges deriving by this being the only project of this magnitude entirely financed by a First Nation.