Guelph, ON –  Nick Mocan, M.Sc., P.Eng., was honoured at the 2013 Honours & Awards Banquet at the University of Guelph with The School’s Engineering “Mid-Career Award”. The award recognizes one alumnus each year who has earned respect within the the profession and in the broader community, an alumnus who has already attained a level of significant achievement, and shows promise of future contributions. 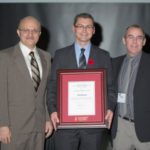 During his eight years with Crozier & Associates, Nick has led a growing water resources department, recruiting and mentoring over 15 promising young co-ops and graduate engineers. He spearheaded the opening and subsequent expansion of a highly successful Milton office, which he continues to manage for the firm.  In 2010, he accepted an ownership position as an Associate of the firm.