Home > Who We Are > Our Culture > Collingwood Mullets take back the Cup!

Collingwood Mullets take back the Cup! 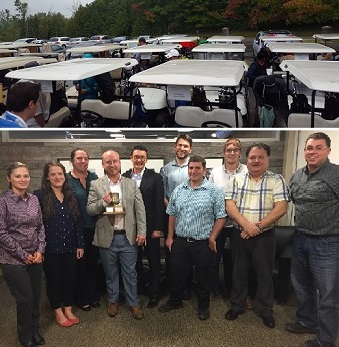 What do you do when the forecast calls for torrential downpours and thunder storms? Some brave golfers from Crozier Collingwood and Crozier Milton attend the 6th Annual Crozier Golf Tournament, that’s what!

In spite of despicable weather conditions at the Shelburne Golf & Country Club, golfers from both Crozier offices were determined to stay the course. The “Collingwood Mullets” toughed it out over the “Milton Metros” to take back the coveted cup (thanks to Jim Koutroubis sinking an amazing 20 foot put on the eighteenth!)

Golfers on both sides had some other award-winning moments:

After two rain-soaked tournaments, let’s cross our fingers that the sun shines bright for the 7th Annual tournament in 2017. And until then … Keep Calm & Drive On.