Owen Sound, ON – Crozier & Associates was proud to be a sponsor of the first annual Cobble Beach Concours d’Elegance held in support of the Sunnybrook Foundation Helipad Campaign.  This inaugural event showcased over 110 unique and rarely seen automobiles from across Ontario, Quebec and the Northeastern & Midwest United States. Show chairman and founder, Rob McLeese hosted this exclusive classic car exhibit on his picturesque Cobble Beach Golf Resort community property on the shores of Georgian Bay. 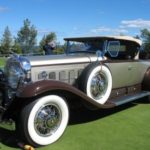 The event joins the ranks of other world-class exhibits previously only held outside of Canada – famously the Pebble Beach Concours in the US and the Como Beach Concours in Italy.   With a portion of every ticket donated to the Sunnybrook Campaign, the 4.000 attendees, raised over $50,000 .  Plans are already underway to top that figure with a 2014 Concours slated for September 2014. Crozier & Associates has been involved in the Cobble Beach residential development as engineer for over four years.