Constructed around 1867 and as old as Canada itself, Graham/Robinson House, a well-crafted, 1½ storey, red brick, heritage dwelling was recently moved from its home for the last 150 years at the south end of Bolton, to a new location within the Bolton Gateway subdivision.

According to historic records and a Town of Bolton report, this well-preserved structure has significant heritage value, as an excellent example of an “Ontario Gothic Cottage” – an architectural style which, although popular and common at the time of its construction, is now quite scarce. Further, the home was originally built for prominent members of the community of Tormore, William Graham, a local farmer and businessman, or his son-in-law, Robert Robinson, a farmer and veterinary surgeon. As such, Graham/Robinson House tells an important story about Bolton’s cultural and architectural history. 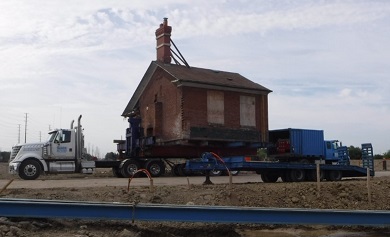 Crozier & Associates, the Consulting Engineer for the Bolton Gateway development, along with a team of contractors and trades, had the honour of taking part in the relocation and preservation of this vital heritage building. From design of the subdivision infrastructure around the inclusion of this beautiful home, through paving the roads, Crozier & Associates was able to help clear a safe path for the transport of the home onto and through the subdivision. With a click of the heels, this piece of Bolton history now finds itself safely positioned in one of the newest subdivisions in South Bolton.

Print | Back to News
Collingwood Rated Top Entrepreneurial City Can Municipalities and the Building Industry Association Agree on Who Pays for Locates in Unassumed Subdivisions?