Bowl for Kid’s Sake Rolls Out! 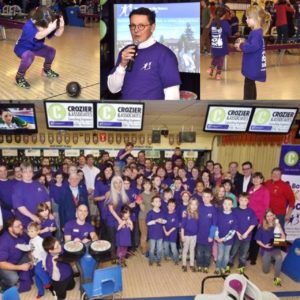 The smiles were as bright as the colours that lit up Georgian Bowl in Collingwood this past Friday. It was Big Brothers Big Sisters of the Georgian Triangle’s kick-off of the 2016 Crozier & Associates Bowl for Kid’s Sake and the fun was on!

It may not be an original turn-of-phrase but we were truly “bowled over” by the turnout from local media and dignitaries t
o the businesses, families and friends who made up the first wave of supporters and bowlers to launch the event. And then there were the “littles” and “bigs” and all the volunteers who kept things rolling.

The big take-away was the presence and maturity of the youths that spoke at the podium about their mentors. If their confidence is a reflection of the real-life value of these programs, we should all be proud to play even a small part in keeping them funded.

It was a privilege for our Crozier team to add $6,250 in cash and in-kind donations as title sponsor again this year and another $1,550 (and counting) in team pledges.

If you haven’t signed up yet, the event runs through to March 11 here in Collingwood and on March 22nd and 23rd in Meaford. The goal is $90,000 – we’d love to have you lace up and help us strike it!

Our thanks to Dave West and My Collingwood.ca for the pictures in this post.