In the periphery of planning for this weekend’s Thanksgiving feast and family get-togethers, most of us are aware that not all tables in our communities will be set with an abundance of food. The extent to which hunger is an everyday reality for many families, was brought home this week for those who participated in United Way Milton’s “Seeing is Believing” bus tour. 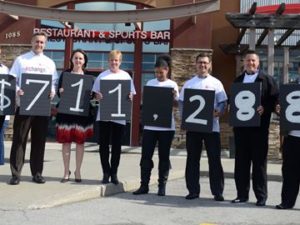 Organized to launch their 2014 fund raising campaign goal of $711,288, the United Way Milton tour gave staff, volunteers and donors insights into 3 of the 29 agencies under its umbrella to see where their financial contributions were going.

“It was an eye-opener” Nick Mocan of our office, who joined the tour, tells us. “It’s hard to imagine a life without the certainty of food on the table and the dignity of basic necessities, until you hear the stories of families struggling right here in our community”. Typical of even the most affluent communities, one in four residents of Milton, according to Kate Holmes, CEO of United Way Milton, use the agency’s services to bridge what is becoming a growing need.

For more information on how to support families and individuals in your community with a donation or by becoming a volunteer for United Way, visit miltonunitedway.ca or your local United Way website.

With credit to:  Inside Halton October 8/14 article at  United Way Milton sets fundraising goal at more than $711,000